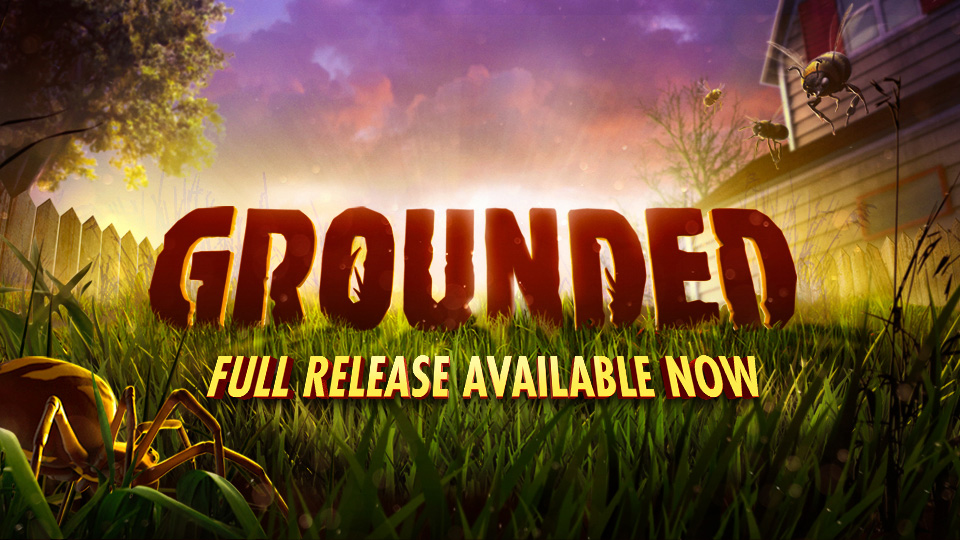 ? Join Shyla, Obsidian's Social Media Manager, as you find out what new areas have been added, who the new "neighbors" are in the game, and so much more in this 1.0 Full Release update for Grounded.

NOTE FROM THE DEVS

We want to give a big and special thanks to our community who helped us in our two year journey from Game Preview/Early Access to full release. Now that we've hit 1.0, your top question might be, “What is going to get wiped?”. Lucky for you the answer to that is, not a lot! The Grounded team is happy to inform you that your bases, recipes, and other unlocks will carry over. You will be placed at the New Game starting location to ensure there aren't any issues and all Milk Molar points will be refunded (more on that later!). The story quests and content for this full game release will be reset but your beloved bases, unlocked recipes, and inventory items will be there when you open your save.

Now that you know what you'll be able to carry over, let's get into what's new in the 1.0 release.

We’re excited to announce that the story is now available to play in Grounded!

Since the start of your time in the backyard, there have been some questions that we've all wanted answers to. Why are we so tiny? How did we wind up in this backyard? Who did this to us? Gear up and get ready because you’ll be able to experience the full adventure the next time you load the game. As the story unfolds, you’ll expose the mysteries surrounding the backyard by traversing through areas, old and new. Venture forth and discover the secrets that will help you go big and go home!

Come check out the vast, sprawling wildland full of towering manmade items found in the Eastern Upper Yard. You'll be able to explore a brand new tunnel system, meet new angry bugs, and discover new resources for you to use.

Looking to mix things up? We added three Super MIX.Rs across the upper yard. The Super MIX.R is harder than the MIX.Rs you’ve encountered in the yard, but it will give extra Raw Science when completed!

Along with the Eastern Upper Yard, you will now be able to find new secret labs. You may notice that some of the existing labs and secrets have been--[REDACTED].

The glider slot is now the accessory slot. “What? Why would I need that?”

Glad you asked! We have added what we call trinkets into the game. Trinkets, such as the Insulating Larva Spike, are items you can equip for special bonuses like Sizzle Protection to help you with your time in the backyard. You can find some of these unique trinkets in the yard and, if you’re lucky, they will appear as a loot drop.

Dandelion tufts will automatically be in the accessory slot if it was equipped in your glider slot but please note that they need to be re-equipped after using trinkets to help prevent you from falling to your death.

Coming in hot is the hot deposit! You're now able to Hot Deposit to all nearby storage containers, which can be done using the new Hot Deposit Nearby Storage action.

Items will now remember what slot they were last in and will attempt to return to that slot when being added back to your backpack via reequipping or picking up a death backpack. Keep your inventory organized and sorted the way you intended it!

Milk Molar unlocks have been refunded due to the new additions this release brings. With that said, you can reallocate them and get yoked! When you go through to apply them again, you may notice that the Hunger Drain and Thirst Drain upgrades are now a single purchase upgrade. In addition, Mega Milk Molar stack size upgrades have been increased from 3 to 5.

There’s also a new personal upgrade for the Milk Molar system called Healing, which will increase the health you will receive from healing items.

Additionally, there are six new mutations for you to discover and we’re excited to have you try them!

Adjustments have been made to the weapon and armor upgrade system based on the wonderful feedback provided by our community. We have renamed Stones of Toughness and Rocks of Style to Quartzite and Marble, and Tough Nuggets and Style Nuggets to Quartzite Shards and Marble Shards.

Plus, there’s an additional crafting step added to the weapon and armor upgrade process, where you now must process the Quartzite and Marble into usable upgrade resources called whetstones and armor plating.

You’ll still unlock alternate crafting methods for each tier of upgrading resources as you progress through the game, but now you’ll be able to craft whetstones and armor plating instead of Quartzite or Marble. We hope you enjoy these marble-ous changes!

The tier 3 crafting recipes for creating supreme upgrade materials have now been added to the game. Instead of Rad Tough Nuggets and Style Nuggets, players can craft Supreme Plating and Supreme Whetstone to get their weapons and armor to +9. Go on and craft to your heart’s content!

With that said, check out a brand new weapon type: staves! You can craft staves out of different candy shards you find in the yard, each with its own unique attack style. You can craft three different types in total, but it will be up to you to figure out what they are. It’s time to fight enemies with some flavor.

We’ve got new crafting recipes for you to unlock! Are you tired of food going bad after a day in the yard? Introducing the Fresh Storage, a smaller capacity storage container that keeps food from spoiling! Looking to spruce up and strengthen your base? The Tier 3 Building Set is the highest form of defense for your base, and you’re going to need a new building material – ash! There’s also over 50 Sign Frame options for you to try and we’ve added the Pebble Path if your base needs a walkway. There’s so much more for you in store and we’re eager to see what you can come up with for your base!

There are some new neighbors joining us in the backyard. We know you love mosquitoes so say hello to the tiger mosquito! The lovely black widow and its black widowlings are coming to this update too. Other new members of the creature club include the moth, spiky water flea, tick, worker fire ant, and the soldier fire ant. Oh, and don’t forget to visit the beautiful pink Orchid Mantis over by the shed!

We've also included some more story bosses, but who or what they are is up to you to uncover. They’ll be waiting for you so gear up, explore, and have fun!

It’s been an amazing 2 years of Grounded and we’re very excited to have players check out 1.0, our biggest release of content ever! We couldn’t have done it without the love and support of our community members with their amazing feedback and suggestions – you guys are what made Grounded special from the ground up. We’re super stoked to have players “beat the game!” and there’s much more for you in store. For more information on what this 1.0 release update brings with it, check out the Patch Notes below!

Welcome to the official 1.0 version of Grounded: the complete game and the biggest release of new content to the yard!

First and foremost, we'd like to extend the biggest thanks to all of the players who joined the backyard during the last two years. Your huge amount of support and feedback was absolutely fundamental to the growth and success of Grounded. We would not be where we are at today without everything you all have done.

As a special thank you gift, for those of you who joined the yard during Game Preview / Early Access, we have included a special Sign Set that unlocks in any game you play if it is detected that you have an Early Access save on your account. This set includes 4 signs that let you show your Early Access swag and some nods to some certain events you may have witnessed over the last two years.

If this is your first time in the yard, welcome to the amazing community. We're excited to have you all experience the full story and mystery of the yard.

For all players, new and returning: remember, Stay Safe and Stay Grounded (And also, have fun!)

You can now "beat the game!" The complete story and mystery of the backyard is now available to play and experience.

This includes full voice acting passes on previous dialogue that was missing voice overs as well as all of the new dialogue added in 1.0.

Story and Quest progress will be reset for saves made during Early Access.

A large, dark, and dank zone under the Shed where the mystery of the backyard continues...

New creatures for you to encounter in the upper portion of the yard!