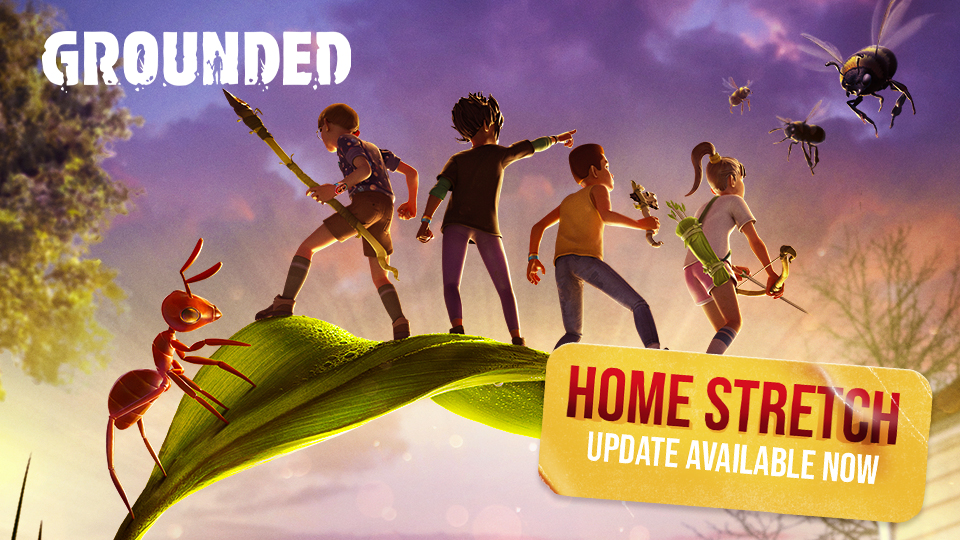 ? Join Shyla, Obsidian's Social Media Manager, as she reveals all the new and updated content that puts Grounded into the Home Stretch. This is the official last update before Grounded 1.0 releases on September 27th, so we hope you enjoy what the team brought in this update!

A message from the team: This update will be notably lighter than previous ones as we have been putting most of our focus towards 1.0 work and polish which will be our biggest content release to date. The Home Stretch (0.14) is the final major update for Game Preview prior to our 1.0 Release in September. Thank you.

For more information on Grounded, check out our channels:

Are ya ready everyone, because we are excited to bring to you Shared Worlds!

Shared Worlds are stored in the cloud, and you can share these with any of your friends so they can host that world while you are not online.

Check it out the next time you are playing with your friends!

Craft your delicious backyard meals in the cookery starting this update! This also makes cooking meals easier to get to when players are just starting out, meaning you can now go out adventuring longer than ever… at least before you start to get hungry that is.

Unlock it by purchasing the "Cooking 101" Science Shop unlock which is one of the default unlocks you can purchase once unlocking the ASL station, and then you're good to go.

You can now tame and own a bumbling little gnat pet! You'll just need to craft the new Rotten Meat Slurry and hope they enjoy it!

Now you and your gnat can go boop the other bugs in the yard together!

The team has been hard at work revamping the Armor and Weapon Upgrade system, so thank everyone for sharing your feedback with us!

You will notice that we have removed Quartzite, Leather Scraps, and Leather Plates. Now when upgrading, you will need to acquire a unique, non-respawning resource called Style and Tough Nuggets found across the yard.

These can be found by harvesting Stones of Toughness or Rocks of Style. For more details, check out the description in the patch notes down below!

You can now create a Shared World as well as the Standard Worlds you have been doing since Game Preview launch. Shared Worlds are stored in the cloud and you can share them with any of your friends so they can host that world while you are not online.

NOTE: This feature is considered beta and could have issues and could require online shared saves to be reset / lost as bugs are ironed out. If you test this feature out with a save with lots of progress, make sure it is not the only working copy of the world you have on your account. The shared save service could also go offline at any time during this testing phase to account for issues or updates as needed.

You can now convert any non-custom game into a custom game at any time while playing to be able to tune values on any game as you go.

You can now tame and own a bumbling little gnat pet. Pets are also more helpful and less squishy as outlined in tuning changes further below.

Upon resting, you will see a quick time-lapse of the yard as the 8 hours pass.

BURG.L has acquired enough chips to remember he can roll his treads to inspect the Oak lab and fulfill his assistant duties.

The "Save Game" interface now allows importing Steam saves into the Windows Store version of the game.

Note: The old way of importing saves into Steam via placing them in a specific folder in Windows no longer functions or is supported.