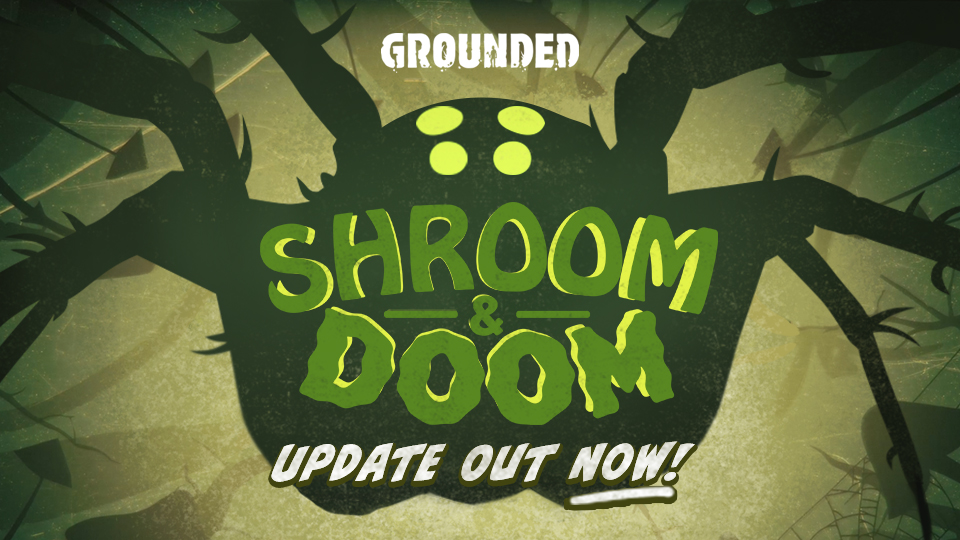 🏡 Join Shyla, Obsidian's Social Media Manager, as we find out where the shrooms and impeding DOOM are that give this update its name! From new building materials, Photo Mode additions, SITTING, pets, and more, you'll want to check out this vlog to give you a proper head start into the update!

Every mushroom you see in the yard is now harvestable! Chop down those toadstools and grind them down into slurry you can use to make bricks! The castles you can create from these bricks are the current sturdiest defense you'll have against the dangers of the yard.

New Crafting Structures: The Grinder and the Oven

We've also added a whole host of new building options, such as pillars, half-walls, and flipped building parts. Check out our May dev blog to see more.

Grounded's first boss is finally here, and to celebrate, the team thought our backyard explorers should be rewarded with one of the most terrifying spiders they could find. You're welcome.

For anyone brave or foolhardy or both, she can be found in her lair near the Flingman flying disc in the Hedge, but it might take an offering of a tasty morsel to tempt her to face you. Just be warned - she might consider you the tasty morsel instead, so you'll want to make sure you're geared up and prepared.

Defeating her will give you access to unique and powerful rewards, so we wish you every kind of luck!

Introducing the latest in the range of modified TAYZ.Ts. This enhanced defense variant called the ARC.R is outfitted with a capacitor stack and hefty arm cannon which unleashes energized balls of charged static for a greater challenge in the labs.

Take some slurry from the Grinder and entice a weevil or aphid to be your pet (that you can actually pet!) - each one has a different personality, and you can tame multiple if you make little pet houses for each one. Just be warned, these little critters are just as vulnerable with you as they were before, so treat them with care!

You asked for it, the team delivered - sitting is now available at your nearest sofa and chair!

We're still working on it, but the Haze lab can now be accessed! You'll want to venture in there to find the BURG.L chips that will unlock the new buildings mentioned above!

May's Letter from the Developers

In case you missed it, the Grounded development team released a letter in May outlining the new update schedule and a few more things they were excited to bring to Patch 0.10.

Check it out here!

Weevils and Aphids can now be tamed as pets!

Yes... you read that correctly.

20 Achievements have been added to the game (for all platforms). These are an initial set and more will be added as the game continues to grow. We are currently working on the functionality to make them unlock if you have previously completed the task, but there is a chance this may not be possible. Certain achievements for completing tasks such as "kill a wolf spider" or "craft an item" will need to be completed again to unlock.

NOTE: Achievements will only be available for testing on the Steam version of the game. All other platforms will receive the achievements when 0.10 releases on June 30th.